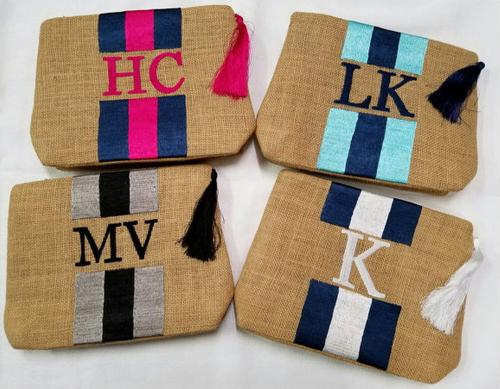 
Natural jute is a natural fiber which makes a perfect neutral background for these beautiful stripes and monogram. A trio of standout stripes draw attention to your monogram and the matching tassel adds an extra touch of personality. Jute has the added bonuses of being durable and hiding dirt well so you do not have any worries about taking this great bag everywhere. This bag is so outstanding it makes the perfect cosmetic bag or casual clutch.

Enter only initials you want used in the appropriate boxes (first, middle, and last name) below


Price: $125.00 In stock! - Browse this brand: Moyna bagsOur products are custom made to your specifications. This product ships up to 3 weeks after your order is placed.
Customize: