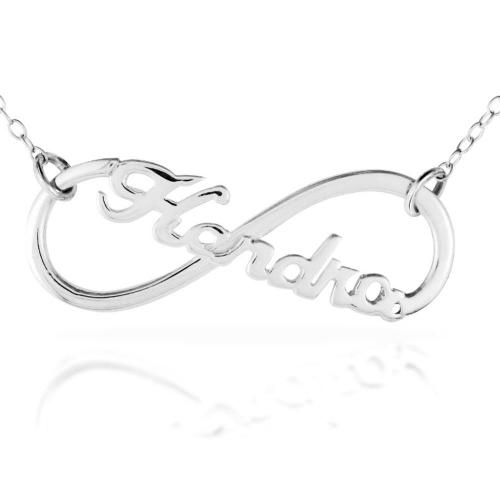 Price: $105.00
Scroll down to customize your order

Leave no doubt your love is infinite; give her this hand crafted piece combining her name with the symbol for infinity. Wonderful as a special gift but best when given "just because."

What makes our pieces unique? All of our pieces are hand crafted, not machine cut, which gives them smooth edges and allows for a graceful design flow which cannot be achieved in machined pieces. Our pieces were designed based on my personal favorites to which I have added an extra personal touch, allowing me to share something personal with you. I hope you will enjoy wearing your one of a kind piece as much as I enjoy designing for you.


Price: $105.00 In stock! - Browse this brandOur products are custom made to your specifications. This product ships up to 4 weeks after your order is placed. There are 3 days left to order this for pre-24th delivery.
Customize:

Appears in these galleries
JewelryThe Pink Monogram NecklacesNecklaces And Pendants