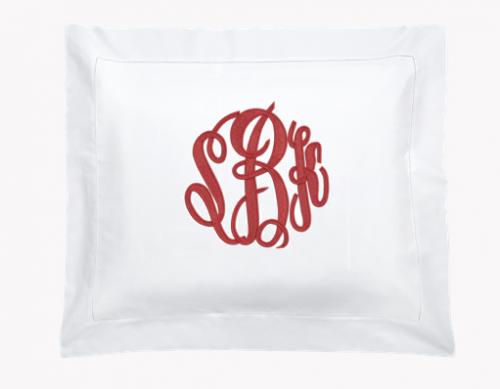 Dress your bed with an elegant pure white linen monogrammed pillow. Sometimes just one is all that is needed to tie in the bedding together. What a great idea for a girls room or a dorm room. Perfect for a single larger pillow in a master bed room.Here is a single of standard Monogrammed Linen Hem stitched Pillow.  Monogram will be done in the center of the pillow and the size will be about 8 inches tall. Depending on the font choice will determine the width of the monogram. The font shown on this image is called Sydney. The pillow sham measures the size for a stand pillow form. Pillow form is not included. The monogram is 10 inches centered on the stand sham.


Price: $125.00 In stock! - Browse this brand: The Pink MonogramOur products are custom made to your specifications. This product ships up to 2 weeks after your order is placed.
Customize: