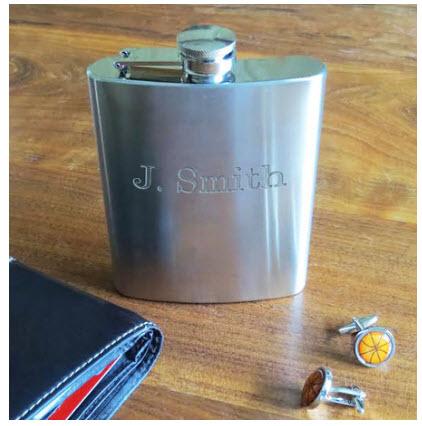 Price: $28.00
Scroll down to customize your order

The simple yet practical hip flask has been a rite-of-passage gift for young men (and, since the end of the stone-age, young women)
since forever; in the enlightened world, the 18th birthday is often marked with a personalized flask while in more head-in-the-sand constituencies, the young adult is forced to wait until the 21st birthday. Regardless, this elegant personalized 7 ounce stainless steel flask makes a great groomsman or graduation gift.

Price: $28.00 In stock! - Browse this brand: Crystal ShoppeOur products are custom made to your specifications. This product ships up to 2 weeks after your order is placed.
Customize:

Appears in these galleries
Monogrammed Barware