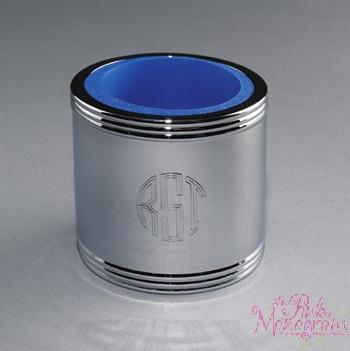 This brushed stainless steel koozie will keep your 12oz soda or beer can cold. The look is elegant and refined - a step above the regular foam kind! (Though we have those, too!)

Great for groomsmen gifts in the Old English or Three Letter Round Monogram, or a perfect bridesmaid gift when done in the Fancy script. This also is a fun graduation gift for anyone going off to college for the first time.

The Koozie shown is done in the 3 Letter Round Monogram. New to The Pink Monogram.

(any options you select will also be discounted) In stock! - Browse this brand: Crystal ShoppeOur products are custom made to your specifications. This product ships up to 2 weeks after your order is placed. There are 14 days left to order this for pre-24th delivery.
Customize:

Personlaized Cufflinks Men's Silver Round Beaded
More like this