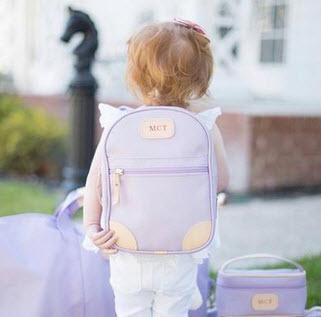 How adorable is this Jon Hart Personalized Mini Backpack! This is a must-have for all kids Use it for school or pack it full of activities for your next family road time! This Mini Back Pack is a perfect size for your little one to carry on their own! It features nylon shoulder straps and a zippered front pocket.

This Mini Back Pack also makes a fabulous lightweight alternative to a purse! It will keep your hands free when traveling or out and about with the family! The opportunities for this backpack are endless!

Price: $125.00 In stock! - Browse this brand: Jon Hart DesignOur products are custom made to your specifications. This product ships up to 4 weeks after your order is placed.
Customize:

Monogrammed Clogs Design Your Own Pair
More like this