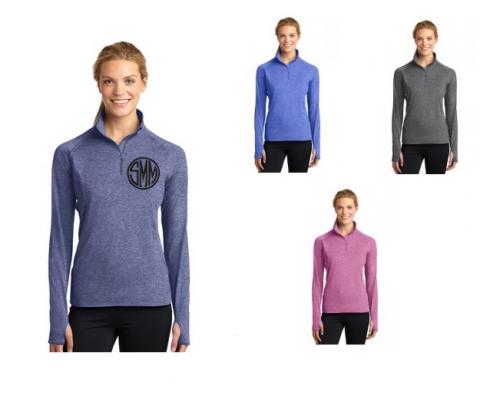 Price: $40.00
Scroll down to customize your order


An extremely flexible layer with a soft-brushed backing and moisture control for year-round comfort. One of most popular 1/2 zip pullovers now comes in a heather look. These Heather pullovers come in Blush pink, True Navy, True Royal and Charcoal Grey. Perfect for wearing alone or under sweaters/jackets/vest. Strike out in this monogrammed pullover that has cadet collar, half zip, thumbholes for keeping hands warm or fold them back, hidden front pouch pocket, and contoured silhouette. Perfect for workouts, tennis or yoga and it wicks moisture away from the body. Monogram is located on the front left chest at around 3 inches in diameter. I like white or grey thread on these. Take a look at our solid colors too. I have a close up in images for you to see the great heather appearance.

See Heather fabric up close in our side images.

Choose your color and size, font and personalize


Price: $40.00 In stock! - Browse this brand: The Pink MonogramOur products are custom made to your specifications. This product ships up to 2 weeks after your order is placed.
Customize: