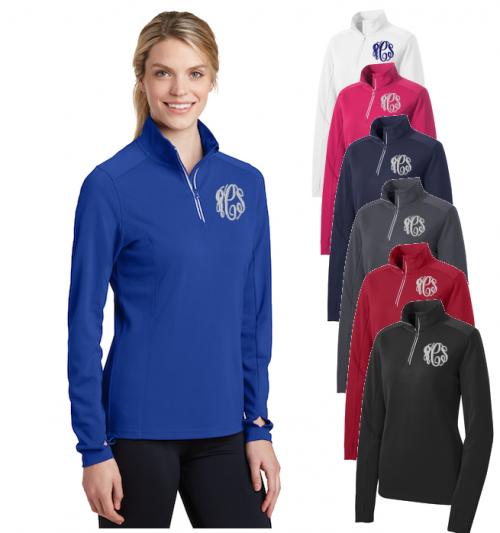 Price: $47.00
Scroll down to customize your order


Mid weight pullover with 1/4 zip that wicks moisture is the perfect workout shirt you will wear to the gym, campus, or a day of shopping. Has a nice touch with a textured appearance and we have a side image for a close up. I think its a dressy look. The monogram will be 3 inches in diameter on the right chest area. Because of the contrasting white zipper taping I suggest the white thread but any color will go too. Comes in x-small to 3-xl. Has a contoured fit, thumb-holes to keep hands warm and a cadet collar for a style that sets it apart from all the rest. Perfect with jeans to workout pants plus it has a longer back hem in the back for a nice look.

This mid-weight pullover has an unbeatable textured look with contrast zipper taping. Plus, it performs by wicking moisture.


Price: $47.00 In stock! - Browse this brand: The Pink MonogramOur products are custom made to your specifications. This product ships up to 2 weeks after your order is placed.
Customize:

Appears in these galleries
Monogrammed Fitness WearMonogrammed Pullovers And Sweatshirts