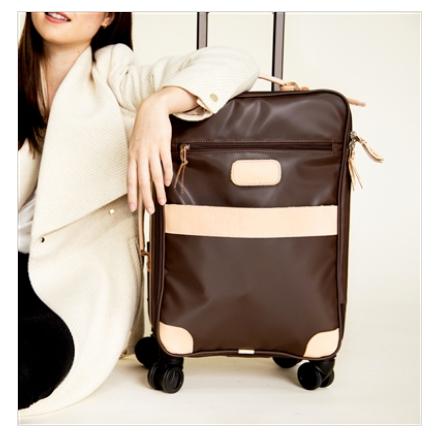 Price: $635.00
Scroll down to customize your order

Keep calm and carry on, because the Jon Hart 360 Carry On Wheel is the perfect travel bag! With a touch of classic JH leather, this rolling carry-on is a timeless classic that is a must-have! This rolling bag is loaded with useful features that make packing and traveling a breeze!!!

Made to last, this luggage has a  PVC Honeycomb frame for durability, 360-degree wheels for easy rolling, and a retractable comfort grip handle system. Fits in most airline overhead bins.

We have all other matching pieces like toiletry and cosmetic cases, duffels, and totes to make a complete gift set for your new graduate or newlywed.


Price: $635.00 In stock! - Browse this brand: Jon Hart DesignOur products are custom made to your specifications. This product ships up to 4 weeks after your order is placed.
Customize:

Appears in these galleries
Jon Hart For MenJon Hart Luggage