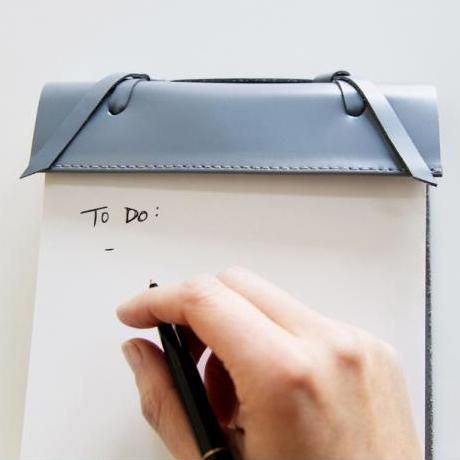 Price: $74.00
Scroll down to customize your order

Our handsome leather desk accessory with a large, thick note pad, wrapped  and tied in one of our signature leathers. Refills are available at check out for $25. Over Sized at 9h x 6.5w x 1.5d this is a nice gift for those who have desks, home office, or need a handsome to do list. Monogram or text up to 15 letters are centered on the top of the pad in your choice of heat stamp as shown or foiling in either silver or gold. I love the natural leather color and it will develop a patina darker color over time. I keep one in my kitchen and on my desk for quick notes, grocery to do list and it looks nice sitting out.

Monogram is all caps ex. John B Doe - JBD or Lisa K Doe - LDK. Text up to 25 characters- "My To Do List" or use our new traditional monogram style with the last name larger in the middle.


Price: $74.00 In stock! - Browse this brand: Jon Hart DesignOur products are custom made to your specifications. This product ships up to 4 weeks after your order is placed.
Customize:

Appears in these galleries
Gifts For MenJon Hart OfficeGraduation Gifts