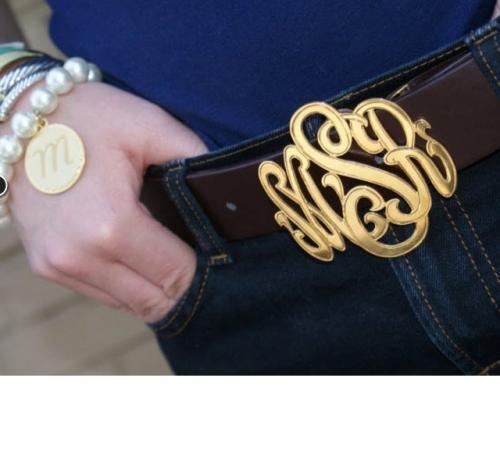 Price: $555.00
Scroll down to customize your order


This show-stopping, hand-cut Monogrammed Belt Buckle is exclusive to The Pink Monogram. This has been a popular request and we are thrilled to now offer this product to our customers. This belt buckle is hand-cut from solid sterling silver and plated in 14 kt gold, and is also available in sterling silver.

This buckle is sturdy and a fabulous size. This buckle measures a large 3 by 3 inches and will vary slightly with your monogram letters. We show it on our model worn with jeans but we love it with our tunics or dresses as a belt.

This buckle has an opening for a 1 1/2 inch strip on the back of the buckle. This monogrammed buckle comes without a belt strip but they are available for purchase online.  We tend to find the strips on amazon - you can search for 1.5-inch leather belt strips. Any strip should fit this buckle fine-

Please be aware that this buckle is hand cut and will take approx. 4-5 weeks to deliver. You will not find this exclusive buckle anywhere else!

Price: $555.00 In stock! - Browse this brandOur products are custom made to your specifications. This product ships up to 4 weeks after your order is placed.
Customize: