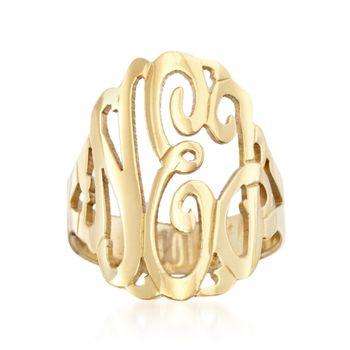 Price: $475.00
Scroll down to customize your order

What a beautiful hand cut monogrammed ring!  This wonderful design is perfect for showing off a new bride's new initials, or could be worn with everyday work clothes!  Our artists craft this gorgeous ring in 14 karat gold. This could make a perfect Christmas or anniversary gift for that special someone.

After placing your order, make sure you take a look at all of our special hand cut jewelry to match in our Hand Cut Jewelry gallery. Sizes range from 4-10; we can do half sizes as well, just leave us a note in the comments section!  This ring is only offered in 14 karat gold.


Price: $475.00 In stock! - Browse this brandOur products are custom made to your specifications. This product ships up to 3 weeks after your order is placed.
Customize: