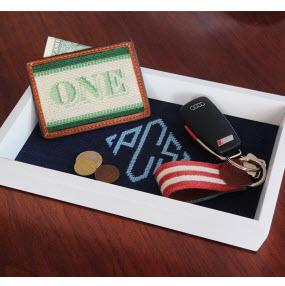 These valet trays combine Smathers and Branson's signature needlepoint with a tapered wooden tray to organize your everyday essentials. We offer both white and chestnut wood trays, finished off with a personalized touch made just for you. The tray measures 9.5" x 6" inches.


Price: $75.00 In stock! - Browse this brand: Smathers and BransonOur products are custom made to your specifications. This product ships up to 2 weeks after your order is placed.
Customize: