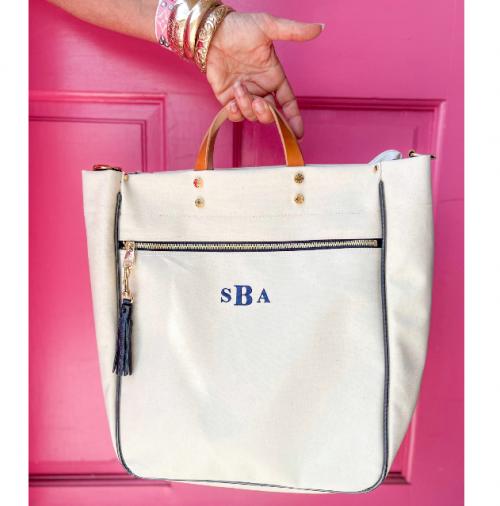 Price: $165.00
Scroll down to customize your order


This tote organizes it all! It's a tote, purse, backpack, briefcase all in one! Designed with a list of details that covers everything, its a must for every woman who has a life. Made of custom coated canvas trimmed with vegetable tanned leather, this tote features two side cubbies perfect for a water bottle, travel umbrella, or the accessory pouch that comes with the tote. It also has an inside, back pocket which fits most tablets. Your embroidered monogram is the optimal finishing touch. Luggage tag shown in the main photo is not included but makes a really cute accessory.

Monogram Font Details for This Item:


Price: $165.00 In stock! - Browse this brand: CustomBoulevardOur products are custom made to your specifications. This product ships up to 3 weeks after your order is placed.
Customize:

Monogrammed Canvas Racing Stripe Tote In 6 Colors
More like this